Did you know that on Vancouver Island, where Robert Held Art Glass studio is located, two species of hummingbirds can be found? Anna’s hummingbirds stay here year round whereas Rufous hummingbirds arrive in spring after a very long migration from Mexico. The tiny birds are delightful subjects for photographers and we’ve captured their beauty and delicate nature in jewel-toned glass. In this blog we’ll go through the steps involved in creating a glass hummingbird then learn more about Anna’s and Rufous hummingbirds.

In this series of photos taken in the Robert Held Art Glass studio, Master Glass Blower Chago takes us through the steps involved in creating a glass hummingbird. It all starts with a punty (rod) and a gather of molten glass from the furnace. The gather is then rolled on a steel marver to get a consistent thickness of glass around the pipe. The next step is adding colour! For the hummingbirds, Chago chooses fragments of jewel-toned glass and rolls the gathered glass over the fragments. They become incorporated into the glass and give it a range of colours. 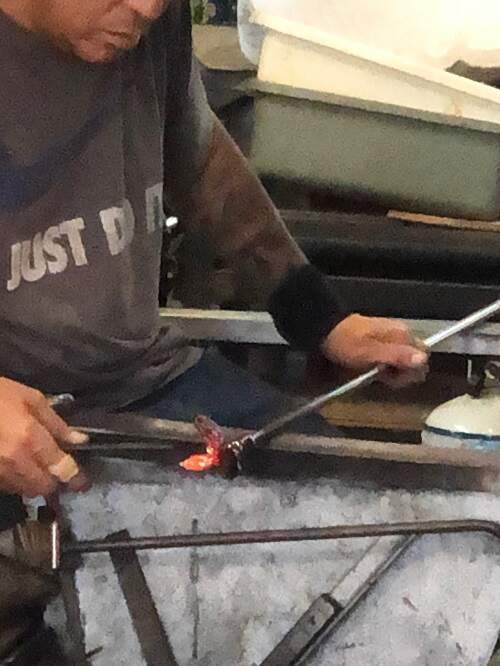 Now the hummingbird starts to take shape. Chago uses metal tongs to pull glass from the body and form the wings. The tail is formed in a similar way, pulling glass out then downward to shape the tail feathers. 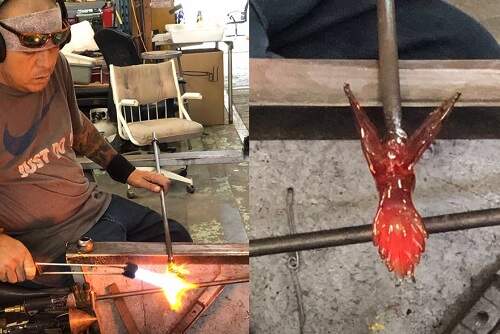 The glass must be reheated several times during the process to keep it at the correct temperature. This composite photo shows Chago using a bench-mounted torch to heat the glass. On the right side of the photo you see a bright red hummingbird; the red colour is due to heat intensity. 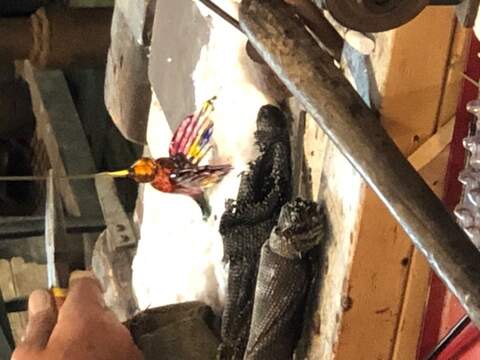 The final step is to form the hummingbird’s beak, which is very long and delicately thin. At this stage the bird is resting on its wings so that Chago can pull the punty upward and stretch the glass that will become the beak. Once satisfied with the length, he uses snips to make the final cut and finish the bird. In this photo the glass has cooled sufficiently that you see the actual colours of the glass. You can also see the fine detail on the wings and tail feathers.

The thickness of the glass hummingbird's beak and body are very different and must undergo a process known as annealing. Finished pieces are placed in a special kiln where the rate of cooling can be controlled. This allows all thicknesses of the glass to cool at the same rate and eliminate stress. Otherwise the glass would shatter. Annealing is a really interesting process and we've included some links in the resource section below.

Chago also creates smaller hummingbirds using the torchwork technique, where borosilicate glass is melted by a hand torch. This method allows for easier manipulation of the glass and can be done in a smaller work space.

Hummingbirds in the gallery and online store

The large hummingbirds can be purchased in the Robert Held Art Glass gallery in Parksville or ordered through our online store (www.robertheld.ca). The smaller hummingbirds are only available for purchase in the gallery. 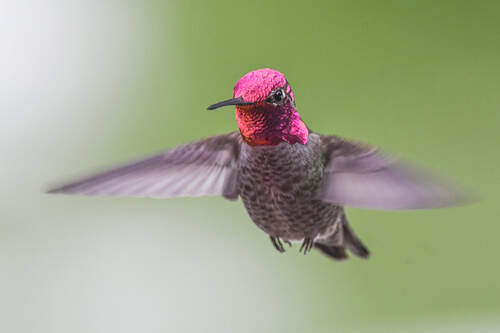 The Anna’s hummingbird, Calypte anna, was named after Anna Masséna. Also known as Princess d’Essling, she served in the court of Empress Eugénie, wife of Napoleon III. The hummingbird was named Anna’s by René-Primever Lesson, a naturalist who had collected the specimen during a journey along the Pacific Coast. Anna’s is now the official bird of the City of Vancouver.

According to the Atlas of the Breeding Birds of British Columbia, the Anna’s Hummingbird first appeared in British Columbia in the 1940’s and has been increasing in number since that time. Adult males have a pink coloured throat and crown, the females are generally metallic green with some pink feathers on the throat.
Anna’s can exist successfully in urban areas where parks and gardens provide a source of food. I love to hear the buzzing sound they make when darting to and fro among flowers, shrubs and fir trees. During the winter there are fewer flowering plants and shrubs so hummingbirds are drawn to sugar water feeders. If you’ve seen these birds near a feeder you know they can be very territorial. In addition to nectar, this species eats small flying prey.

The Rufous Hummingbird’s name, Selasphoros rufus,  is derived from the Latin “rufus”, or red (Wikipedia). Mature males display orange or rust-coloured feathers on their back and red on the throat. Females and immature males are greenish on the back with rust-coloured patches on their sides. 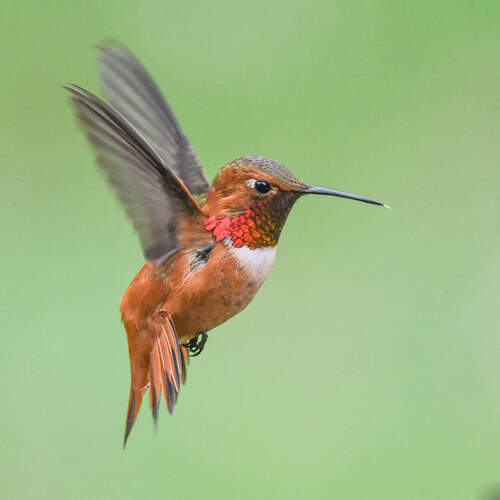 Rufous Hummingbirds are migratory and arrive on Vancouver Island in mid to late March after a 4000 mile migration from Mexico and the U.S. Gulf States. The males arrive first then are followed 2 weeks later by the females. Flowering shrubs and plants such as red currant, salmonberry, arbutus, columbine and honeysuckle are a key food source for these tiny birds. 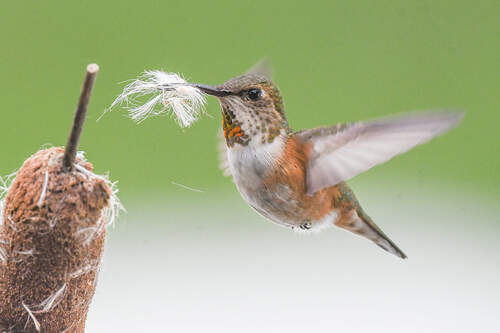 Females build nests in cedar and fir trees and lay 2 or 3 tiny eggs. By late June the young have fledged, ready for the southern migration which begins one or two months later. It’s amazing that these tiny creatures can travel such long distances.

Rufous Hummingbirds are very territorial and will chase other hummingbirds away from feeders.

Corning Museum of Glass Video - why it's critical to anneal glass - https://www.youtube.com/watch?v=qBlsNNPRseQ

Photographs of hummingbirds are courtesy of Mike Yip, a retired teacher and amateur avian photojournalist. He has published several books on Vancvouer Island Birds  http://vancouverislandbirds.com/

Sign up below to receive news, updates, and special offers.